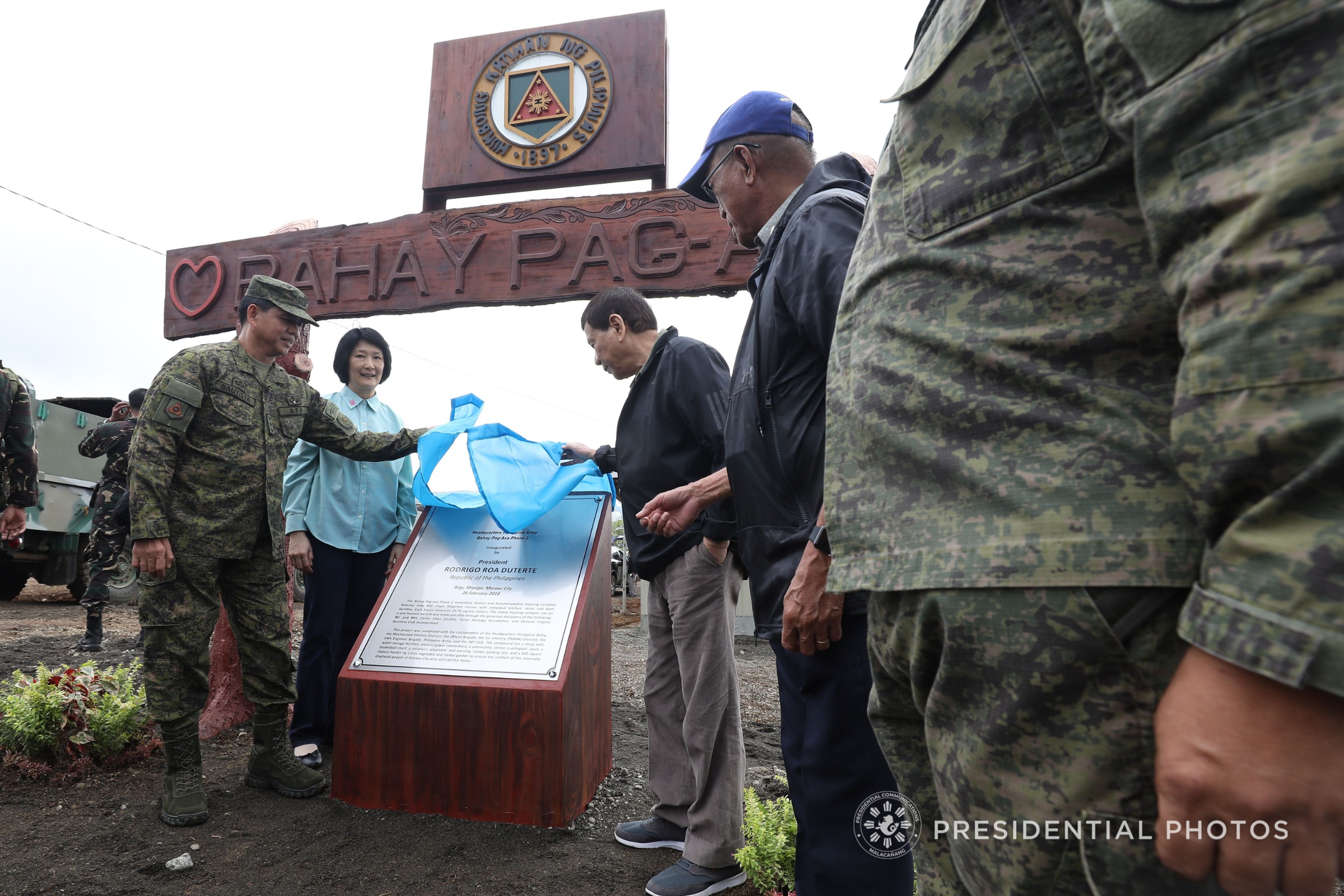 BALO-I, LANAO DEL NORTE — President Rodrigo Roa Duterte on Wednesday, February 28, graced the groundbreaking ceremony of Christine Villas under the New Armed Forces of the Philippines and Philippine National Police (AFP/PNP) Housing Program, assuring the men and women in uniform that public funds are put to good use under his watch.

Upon his arrival at the site, the President was briefed about the project by National Housing Authority (NHA) general manager Marcelino Escalada Jr.

The Chief Executive then led the capsule laying for the construction of the villas for select soldiers based in Region X (Northern Mindanao) and nearby provinces. The units are expected to be turned over in December 2019.

President Duterte said housing units for the policemen and the soldiers are being put up in Davao, Zamboanga, Mati, Tarlac, Baguio, and Bacolod, among others.

President Duterte cited the good performance of the NHA under his administration, adding that the NHA is not tainted with corruption under his watch.

“Pagka ang pera nagamit sa wastong paraan, meron ka talagang makikita. Hindi naman ako. I do not want to compare myself with anybody. But sa panahon ko,” he said.

He also assured the soldiers that his administration will take care of all their needs, such as housing and education for their children.

“Sa panahon ko, may bahay kayo at may plano kasi ako ‘yung Fort Bonifacio. Nag-uusap kami. I want it this year,” he said, noting that he plans to lease part of the camp in Fort Bonifacio.

“Talagang I would like to salute you, the soldiers of the Republic. Yes, sir. Saludo ako basta matatapang,” Duterte said.

This AFP/PNP Housing program came into fruition after the clamor of the military and police personnel assigned in war-torn areas for new designs & modalities that are acceptable and Ready for Occupancy (RFO) to the End-users.

Consisting of 1,000 Duplex-type house and lot package, each of the Christine Villas stands at a 80 qm. lot and 60sqm. floor area and costs P950,000 per duplex. It will be equipped with living, dining, toilet & bath, family area, and two bedrooms.

The Christine Villas, developed by Eddmari Construction & Trading, is the third of the eleven AFP/PNP Housing Project under the Duterte administration. The first two are Madayaw Residences in Talomo, Davao City and Scout Ranger Ville in Brgy. Calumpang & Tartaro-Sibul, San Miguel, Bulacan.

During the groundbreaking ceremony, the President was accompanied by Department of National Defense (DND) Delfin Lorenzana and Special Assistant to the President Christopher “Bong” Go.

Meanwhile, President Duterte said he is not yet satisfied with the number of rebel returnees from the New People’s Army (NPA).

He also said that he has no choice but to order the killing of the NPA members since the rebel group is fighting the government and killing the soldiers and policemen.

The President also said he is not inclined to resume peace talks with the rebels any time soon.

“Not at this time. Maybe. Alongside with the mass surrenders is also the ferocity of those fighting,” he said in an ambush interview following his speech.

Duterte also told the military to reconfigure its tactics on detachment since the rebels have found ways to still infiltrate and shoot government forces through sniper.

The Chief Executive yet again lashed out at the communist leaders, saying they no longer have the same traction as before due to their old age.

As for the remaining Maute terrorists, the President said the government forces will deal with them “harshly.”

“Kaya ‘pag ito, maubos na talaga sila. They can regroup anywhere and we can have a fight again. Pero to the last man ‘yan,” Duterte said.

“Sabi ko, it will not stop until the last terrorist is neutralized. ‘Yun ‘yung sa Marawi. It would be the same rule for any other conflict coming our way,” he added. ### (PND) 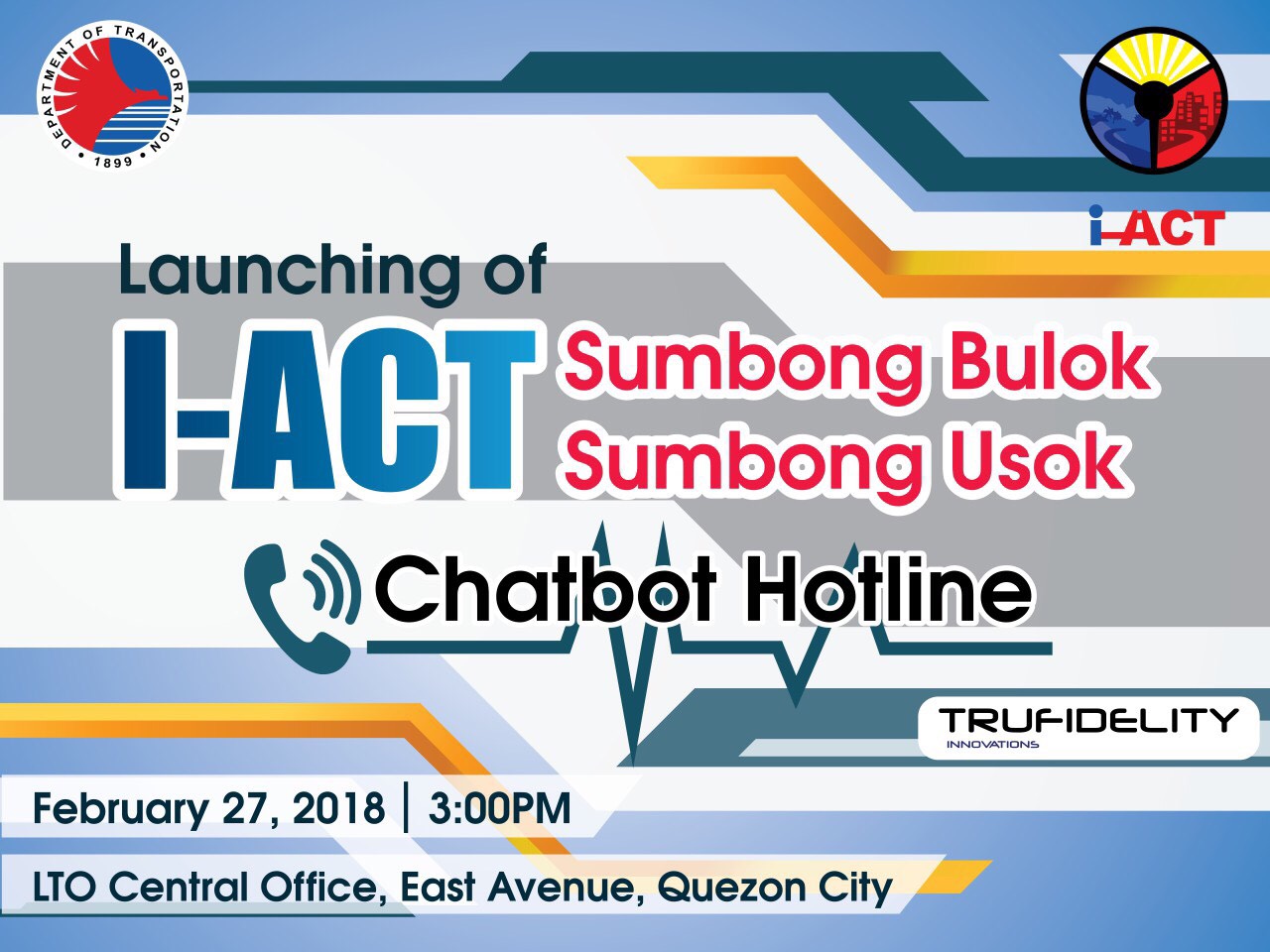 Quezon City --- In an effort to encourage citizen participation, the Department of Transportation (DOTr) and the Inter-Agency Council for Traffic (i-ACT) will launch today a digital platform where the public can report smoke belching vehicles and other violations. The “Sumbong Bulok, Sumbong Usok” (SBSU) Hotline is a digital chatbot hotline that may be accessed via the I-ACT Facebook Messenger. With the SBSU Chatbot Hotline, around 45 million Facebook users […]