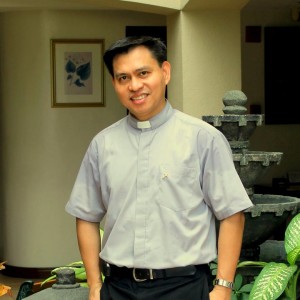 Fr. Henry was born in Davao City, Philippines on December 18, 1968. Did his elementary and secondary education in Nabunturan , Compostela Valley Province (Nabunturan Central Elementary School and Nabunturan National Comprehensive High School – Valedictorian Batch 85). Graduated in Political Science at the University of the Philippines, Diliman as Cum Laude. He became a Freelance writer and an Aide to Senator in the Philippines Congress. During that time he took up Law course in University of Philippines of which later shifted to ecclesiastical studies and decided to go to Spain to further his studies in Theology and finally went to Rome for his Licensure and Doctorate in Canon Law.

As a seasoned painter , father had joined several arts exhibits. He won the design competition for the official logo of the 10th World Youth Day (Manila, 1995), an event highlighted by the visit of Pope John Paul II. One of his Obra Maestra was a pastel painting image of Pope John Paul II in 1997 when he was in Spain. He sends it to the Pope as a personal gift but what a lucky souvenir he got from the holy man. The Pope sends him back the painting with his signature and the official stamp of the Pontificate plus a Christmas card. After he received the Sacrament of the Holy Orders , Fr. Henry was working full time in pastoral tasks among students and young professionals. He has carried out priestly ministry in Spain, Italy , South Africa, Israel and was the Chaplain of Warrane College at the University of New Wales in Sydney , Australia before coming back to the Philippines.

As a writer, he wrote commendable books entitled 1. Mending a Broken Society, recently published, 2.  Diplomatic Relations between the Holy See and the state of Israel (Rome, 2003) and 3. Arise and Walk (Manila, 2007), a spiritual-inspirational book that received numerous positive reviews. The Audio-CD version of Arise and Walk was nominated and won a special citation from the Catholic Mass Media Awards in 2011. Some books are coming soon for publication. Presently, Fr. Henry is doing his pastoral works in Manila, Philippines. “ Forming young minds is the best investment for the future” said our Soldier of Christ. While spending fun time in sports most oftentimes on Table Tennis helped him maintain his physical health.