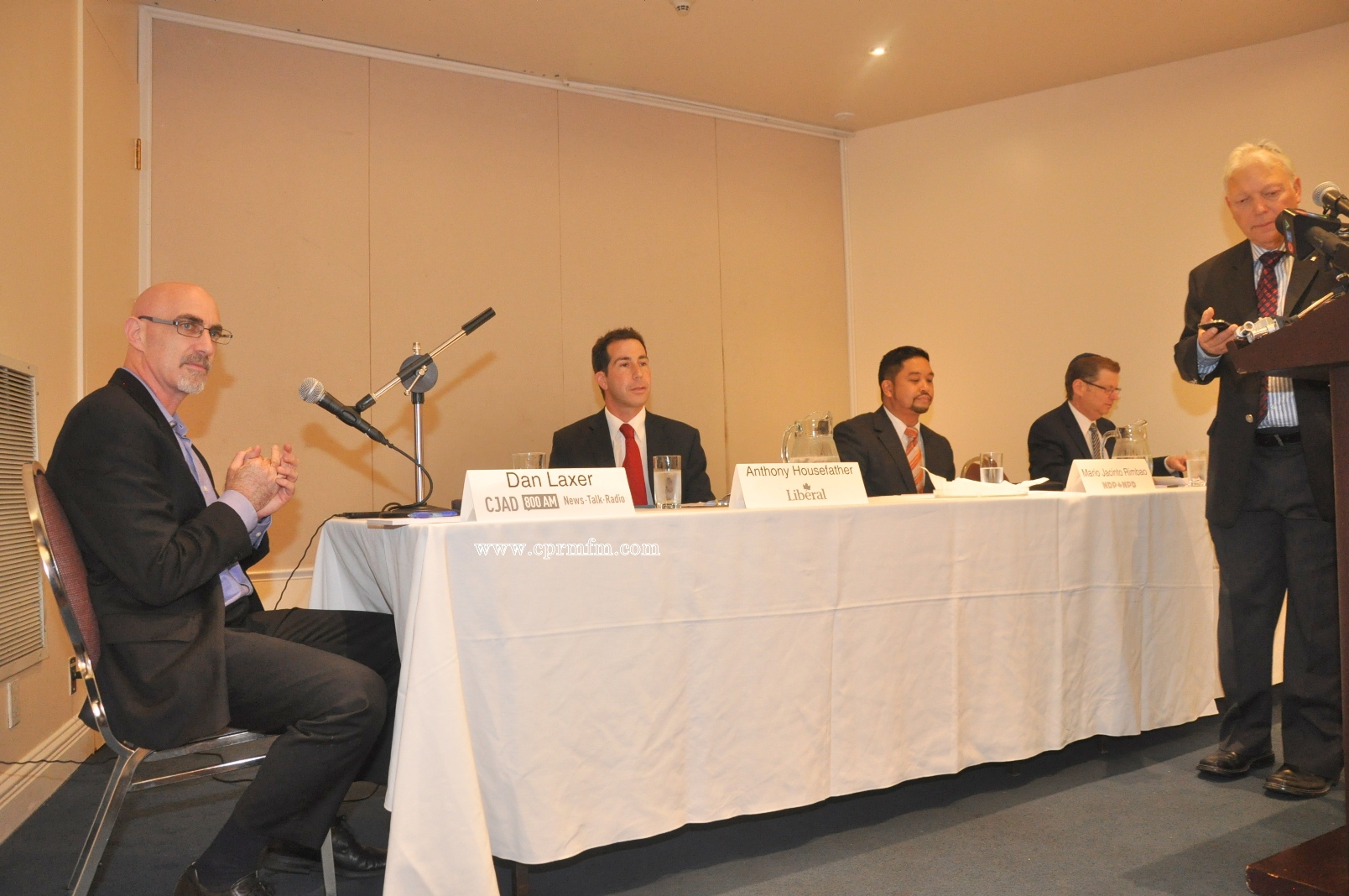 Few more weeks and Canada will decide who to lead the country in the next few years. Here in Montreal a debate was conducted on Sept. 2, 2015 at Spanish and Portuguese Synagogue of Montreal at 4894 SAINT-KEVIN AVE, Montréal, QC.  Steven Slimovitch of B’nai Brith synagogue and organizer of the event open up the debate. Mr. Dan Laxer of CJAD acted as moderator of the three” Amazing High Caliber Candidate” according to Mr. Allan Adel,  the League for  Human Rights chairman in Montreal extended his thanks to the organizer  viewing it as a democratic way of practicing human rights. This event,  gave clarity and practise the democratic process of  showing seriousness in exercising  civil  rights of the voters.

Deciding who to Represent Mont Royal MP in the coming Federal election will hopefully and positively affects the future of the people particularly those residents of Mont Royal. Every ordinary people, the middle class and hard working class  are witness to the present condition of the people living in Montreal and the Province of Quebec. Canada’s recession and the economic  situation in the province,  particularly in the City of Montreal is  a reality, when too many are jobless and  increase of commodities is rising. When senior citizens, hard working parents and single parents  inadequately and insufficiently meet the basic needs of the family. Students needs to find a job to help support his/her studies in order to alleviate  life  living condition. The decision of  who will represent the voice of the people is crucial as this is the only way each family, individual’s human needs are heard, respected and protected.

This debate showed how each candidate present himself to the public on  what  they will do and stand in those common issues encountered by Canadian particularly  in this  province of Quebec and  specifically in the place where they represent.  Mr. Mario Rimbao  introduced himself as a hardworking father, a grown-up in the area where he will represent, work for fifteen years in the Maritime Shipping Industry, a community leader and a mentor to the youth being the  Coach to Philippine Basketball Association in Montreal. Acquired his diploma from Dawson College and gained BA at Concordia University  through his much exerted effort of working many jobs to get his education. A witness to himself  of what’s the reality of people’s living condition in his riding area urges him to bring change for the future. 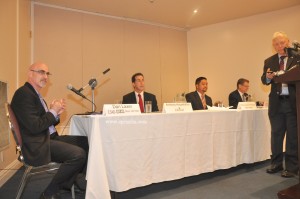 Mr. Anthony Housefather, presented himself citing twenty-one years in political  experience and lately  mayor of  Cote Saint Luc, one of the Borough in Montreal, an individual with track record of being affiliated  to multinational companies and offices in the government. Being in the political arena for many years  offered himself to be  the right one to represent the people’s voice into the parliament in Ottawa.

While Mr. Robert Libman, expressed himself to be self-accomplish for 10 years of service in the politics, wants to retire and go back to his first passion being an architect. What ignited him to run again  in the Conservative Party was that he was inspired by Mr. Stephen Harper. To be a part of the Conservative Party lead by  Mr. Harper believing and trusting in the moral values of their party where they think which is good for every Canadian.

Each candidate answered those questions that deals with the common issues faced by and affects the lives of every Canadian. From economic issues, to social and political issues. Discussing Safe and security  issues in the country. How and what is the position  of each parties. (more details of each candidates convincing words and defense, can be heard in this link: https://soundcloud.com/cprmfm/mount-royal-federal-election-debate).

Mr. Mario Rimbao, a neophyte in the political arena gave a question to both candidate that draw  great applause and reaction from the crowd, after which the two candidates, (who were into business and really had done admirable performances in each of their respective jurisdiction being a political leader), presented their commendable accomplishments. Mr. Rimbao  ask the two leaders, “Where are you in the last few years?” The three have common aim on what significant  voice they have to bring into Ottawa as they declared and explained what each party had to do for the goodness of each Canadian. Though, in the issue of Bill C51, where NDP stands firmly to repel it as they believe of the human rights of freedom for every Canadian knowing that the bill has no clarity. Mr. Rimbao made it clear that he is a Federalist  and will fight for every Canadian to be united and not to be divided.  While Liberal  candidate Mr. Anthony Housefather clarified the stand of their party, clarifying the issue of their leader who said he was against the bill yet voted in support of the bill of bill C51 and reason out why they supported and  express to do  amendments in  some part of the law. All of the candidate expresses themselves loyalty for Canada , to work and do their best for Canadians and make sure Canada will be one of the best country to live in. Among the three, it was Mario J. Rimbao declared that if chosen to be Mont Royal MP. He make sure to bring changes and progress to his ridings and work closely with other political leader  mentioning Montreal Mayor Denis Coderre, Mayor Russell Copeman, Councilor Marvin Rotrand and Magda Magda Popeanu, and even his opponent Anthony Housefather. 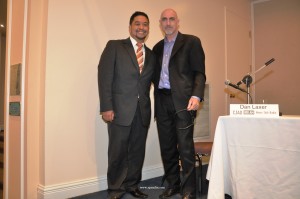 Mayor of Cote Saint Luc . Anthony Housefather who’d been representing Liberal party since he joined politics made a remark  by requesting the public to stop saying to anybody by saying ” you are not a good Jewish if will not vote Liberal” he said that it is not a good practice and it should be stop. This doesn’t apply to Jewish only but to all any groups or community in the Province.

Hearing all the promises and inspiring words for every Canadians’  from the three aspiring candidate for MP  sounds the same words heard from all politicians  seeking themselves to win a seat in Ottawa, though who may be real and faithful to their words remains to be seen.  After these debate, each candidate continue to reach all the elector sect to support them in their plea to be the MP of Mont Royal riding to  Ottawa, bringing  the voice of their constituents must  be given attention and taken seriously by the voters. Who may win will be of great hope for  middle class whom identified as the backbone of the populace. To bring progress and answer to if not all the problems and needs, at least  find solutions and actions to alleviate economic condition that directly affects every individual.

Asian communities comprised a large population in the Province of Quebec and in Montreal. More than 12 thousands of population are Filipinos and  are centered in the Borough of Cote Des Neiges -Notre Dame De Grace which is an area of Mont Royal ridings where these future MP represent. The vote of every Filipino who will participate in the coming election is highly needed to  bring the changes or answer to whatever difficulties  every resident faces nowadays. Solving those issues that affects daily lives of  every resident, Provisions of the basic needs of every constituents in their respective areas to live life to fullest is much expected from the MP candidate who will represent their voice and responsibly perform his role and duties in order to bring progress to the general populace.

Meet the needs and improve living condition to enjoy life  is what matter most. While most of the Filipinos who came to Canada in search for better life. Choose this country, believing that Canada is the best country, a fair and humane country in the world to settle and build a new home. They sell belongings, valuable  properties and spend all their savings just to reach Canada, bringing in those skills and talent to be used and share in order to survive in the new place they believe to start leaving the dreamed life. They leave their native land for some reasons of being so feed-up of all the words and promises from corrupt politician. Politicians who sought for a position in order to protect their businesses and not for the service of the people who voted for them. Most of these Filipinos are highly trained and hardworking skilled individuals. who spend years of sacrifices  leaving their families for few years, work it hard to finally become  a citizen. 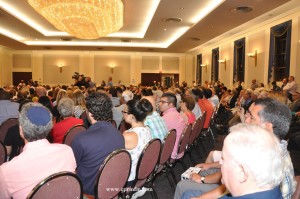 Later years of this decade, life was observe to be socially and economically difficult,  particularly here in the province of Quebec. Difficulties in finding a job is continuously felt. Many issues that  became problems are  frequently encountered and the number of jobless people increases. Fluency in Either English or French is  not a guarantee for someone to land a good paying job unless you are a graduate of a university in this country. It’s frustrating and deceiving requirements and qualification for an immigrant before can enter Canada and upon knowing here that your educational training and skills isn’t recognized and end up working in jobs that doesn’t even needs  university diploma in the country where you came from. You need to work hard, save money for few years to support your education if you want to practice the field you were trained and have experienced for many years.

Talking with many elderly who came to Canada during and after World War ll, found out that during their time looking for a job isn’t a problem, if you are willing to be trained then companies will find you a place where you can  be of useful then work for promotion. Everybody are helping each and everyone to have a job and work benefits were fairly given to every worker. Life was easy, the more hard working you are , more money are put into your pocket, business is good and everybody are happy. Yet, as years passed by, many companies are closing and scarcities of economic source for livelihood are diminishing.  Some companies, business owners doesn’t respect standard labor laws and due to rising number of unemployed make this reason in blackmailing their employees/workers who are forced to work like robots fear of losing job.

What was experienced in the Philippines were slowly felt  in the province. When politicians use their position in advancement of their personal interest by practicing indirect bribery to the voters will surely pressed more difficulties. When priority needs and interest of the people are not fairly  taken into account. When people never learn to exercise their rights  properly and wholeheartedly in choosing a leader who is true to his service to the people who place him/her in that respected  position, to perform his role and duties for the interest of every citizen. Hearing from a political leader saying that this election so far it the most dirty election going on in Canada is something to watch out. Voters are encourage to check out and make sure your name is in the list  so your voice will not be wasted. Exercising  the right  and freedom of suffrage is a role  and duty of every citizen. This coming October  19, 2015,  go out and vote! And please…go out and vote wisely!