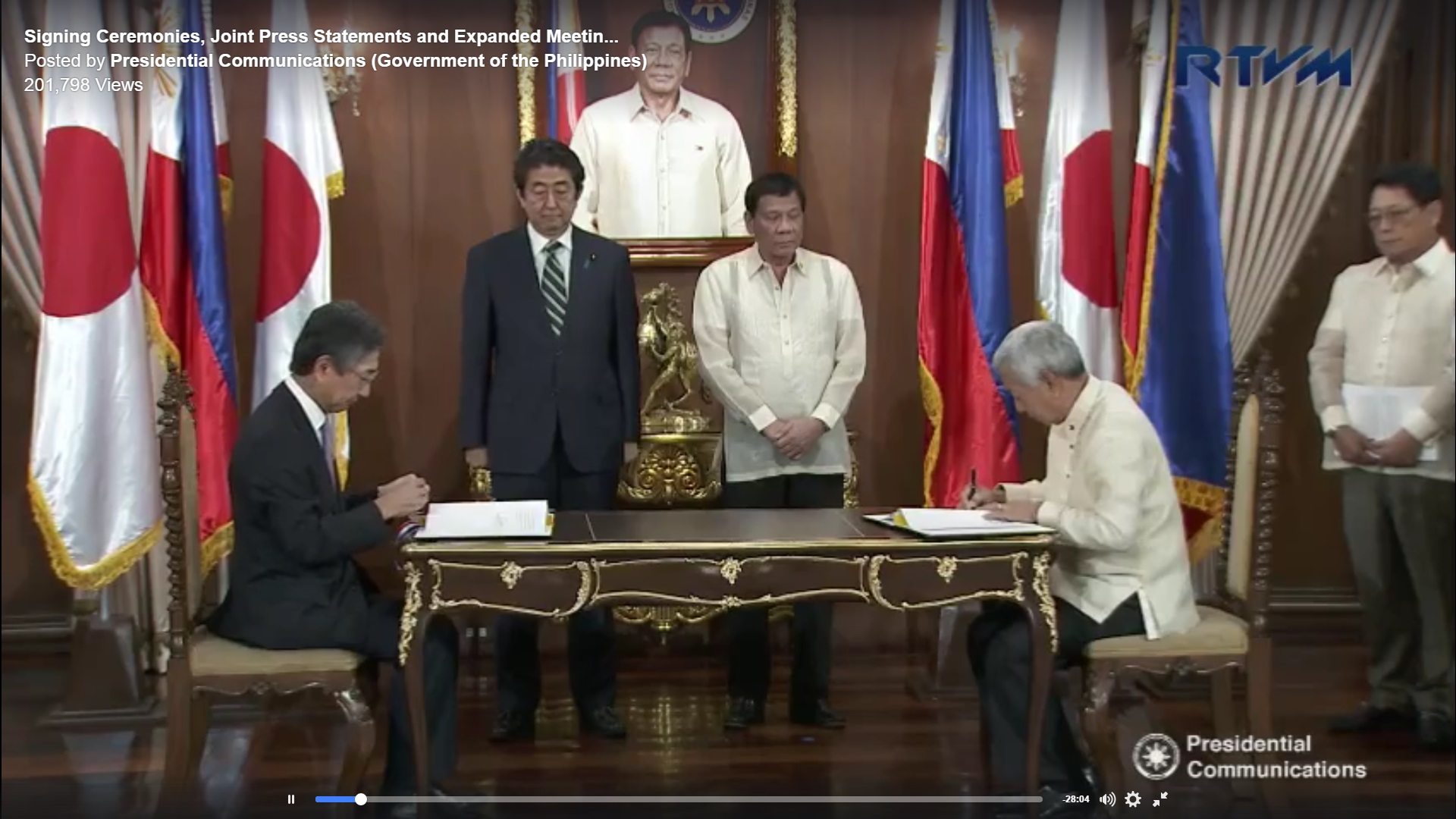 First is the exchange of notes for the grant of economic and social development program. This note involves the grant of 600 million yen for high-speed boats and other counter-terrorism equipment for the Philippine Coast Guard.

Also signed was the Memorandum of Cooperation between the Philippine Coast Guard and the Japanese Coast Guard that aims to enhance maritime cooperation to promote maritime safety, security and marine environment protection.

The Philippine Communications Operations Office and Japan’s Ministry of Internal Affairs and Communication of the Government exchanged Memorandum of Cooperation for proof of concept and testing of road traffic information system through data broadcasting.

The two leaders also witnessed the exchange for the loan agreement for Harnessing Agribusiness Opportunities through Robust and Vibrant Entrepreneurship Supportive of Peaceful Transformation.

The initiative is a five-year project of the Landbank of the Philippines, the financial intermediary of HARVEST that will finance eligible investments of agribusiness enterprises farmers’ organizations.

The exchange of loan agreement was participated by the president of Landbank and the chief representative of Japan International Cooperation Agency (JICA).

In a joint press statement after his meeting with the visiting Japanese leader, President Duterte said he and Abe had a fruitful discussion on issues of mutual interest.

He said as maritime nations, the Philippines and Japan have a shared interest in keeping respective waters safe and secure from any threat.

“Capacity-building and assets acquisition and upgrading will be a centrepiece of this collaboration. We hope to fast-track the delivery of the Philippines of key assets already in the pipeline and the acquisition of new ones,” Duterte said.

“As we seek these new innovations to the Philippines’ capabilities, we will continue to forge ahead with our efforts to advance the rule of law in order to secure the waters in our regions,” he added.

At the same time, the President said they both instructed their respective agencies to seek new areas of collaboration as well as to work on fulfilling the agreements signed in Tokyo last year during his visit.

Duterte and Abe are set to meet with several Filipino and Japanese business leaders in Davao City on Friday.

Abe and Duterte also agreed to work together in pursuing a comprehensive approach in the war against the illegal drugs trade. The President welcomed Japan’s interest in supporting measures to address the tremendous social cost of drug addiction which includes rehabilitation.

In a separate statement, Abe said he is humbled by President Duterte’s invitation to come to the Philippines.

In his meeting with the President, Abe said they both agreed to cooperate on many issues such as creating business opportunities through Official Development Assistance (ODA) and private sector investments.

“This collaboration will be worth one trillion yen over the next five years,” said Abe.

He likewise said that a joint committee on economic cooperation and infrastructure will be launched through which both the private and public sectors will provide a strong underpinning for nation building.

Abe said the two countries will leverage on Japanese technology and know-how to improve infrastructure in Metro Manila and other areas in the Philippines.

The visiting leader also renewed Japan’s commitment to support the Mindanao peace process and his country’s assistance to the Philippines to fight terrorism.

He also vowed to assist the Philippines to counter illegal drugs as well as to build its capacity for maritime security.

Abe also commended the efforts of President Duterte to improve China-Philippine relations in light of the arbitral ruling. He noted the importance of adhering to the rule of law, peaceful resolution of disputes and non-militarization in the South China Sea.

On the nuclear and missile development by North Korea, Abe said he and President Duterte agreed on the importance of the rigorous enforcement of related UN Security Council resolutions including those to be newly adopted.

“Prime Minister Abe’s presence in Manila today is proof positive that Japan and the Philippines are fully committed to bringing this long-standing friendship and tried and tested partnership to even greater heights,” he said in his toast remark.

He wished Japan’s Emperor and Empress good health and benevolent reign, and strong and wise leadership for Prime Minister Shinzo Abe and his wife Akie, who accompanied him during the trip.

As a response, Abe expressed his heartfelt appreciation for President Duterte’s gesture of welcoming him and his delegation as family members in the Philippines.

He also commended President Duterte for building a monument in Davao City when he was mayor honouring the friendship between Japan and the Philippines.

Among the members of his delegation are 24 Japanese business leaders representing prominent corporations ready to discuss tie-ups with Filipino counterparts.

“Everyone loves the Philippines and I do hope that my visit this time will pave the way for further expansion of bilateral relationship not only in economic context but also in the areas of cultural and people-to-people exchanges,” Abe said.

Abe arrived in Manila Thursday afternoon for a two-day official visit in the country. He is the first head of government to have an official visit to the Philippines under the Duterte administration.

Abe flew to Davao City, the home city of President Duterte, after his engagements in Malacanan. 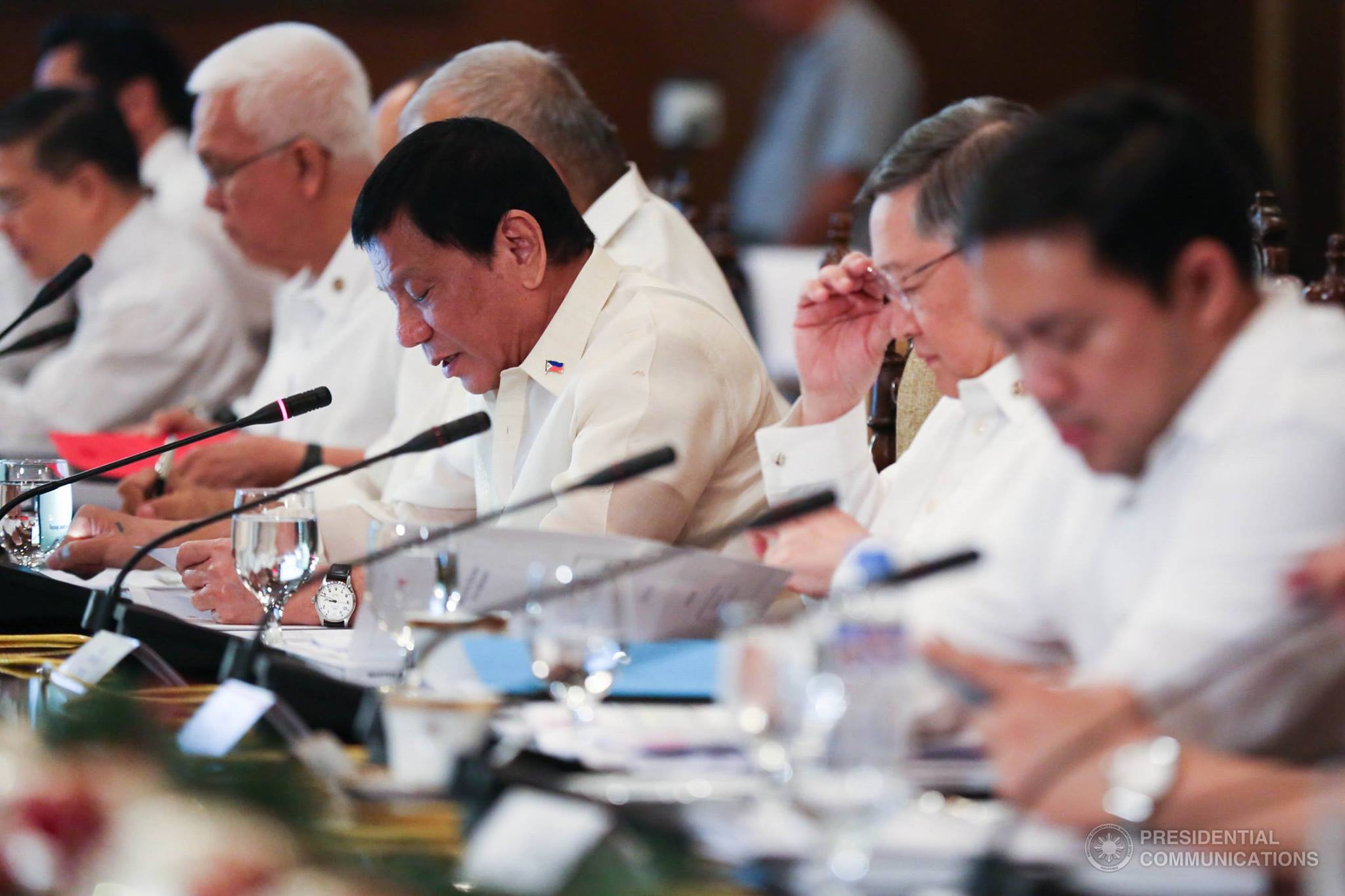 Good news to all Filipino SSS Pensioners for 2017

President Duterte approves P1,000 increase in SSS pensioners’ benefits President Rodrigo Duterte has approved a P1,000 increase in benefits of pensioners of Social Security System (SSS). Presidential Spokesperson Ernesto Abella made the announcement on Tuesday during a press conference in Malacañan Palace together with SSS top officials, Chairman Amado Valdez and President & CEO Emmanuel Dooc. "The President has approved a P1,000 pension hike this month with a corresponding 1.5 […]